A 5- 6 day ride with a mix of road and off-road riding.  The Pyrenees, especially on the Spanish side, takes you through some remote country and impressive mountain scenery.  It is far less developed than the Alps so many of the valleys are less populated  and have less tourism.  The Pyrenees are a series of mountain chains rather than a single range which means you do a lot of climbing as you cross the subsidiary ranges. This is what gives the Pyrenees their character and because the mountains are lower than the Alps, you feel much closer to the summits and ridges as you travel through.The route

Our  trip through the Pyrenees started on the French side in St Gaudens, about 60 km east of Tarbes and took us across the crest of the Pyrenees onto the Spanish side and then down into the hills and mountains of Catalonia before completing the ride into Girona.

There’s a station at St Gaudens and from here you gradually climb from  into the foothills of the Pyrenees passing through the villages of St Girons, Ouest,  Seix, Couflens and finally to Salau, in all about 75 km from the start in St Gaudens. The road after Salau is a dead end but carry on up for about 2 km. The road turns sharply left – there are good places to bivi in the woods around here. At this point you need to pick up the track on the other side of the streams and this requires a bit of map work. 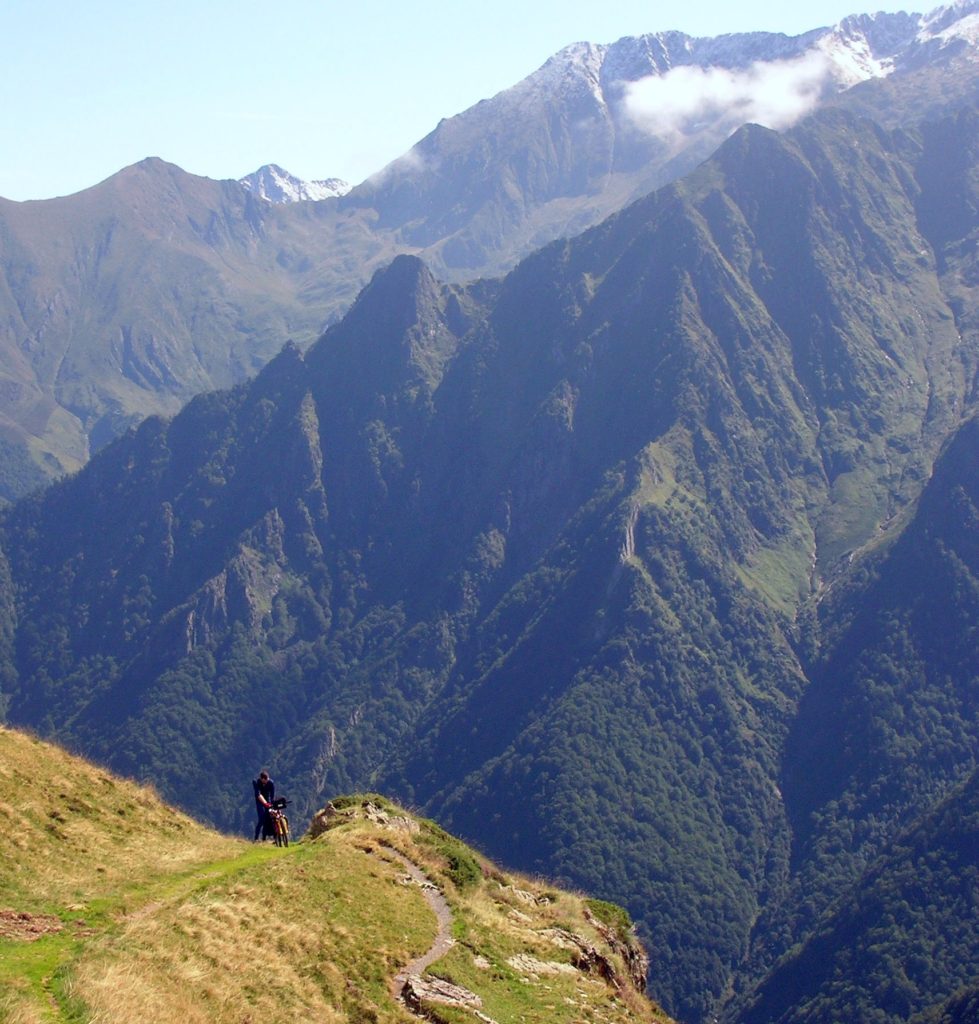 The track is mainly footpath, steep and not rideable, so it’s a long push but the views are stunning and just get better and better as you get higher. 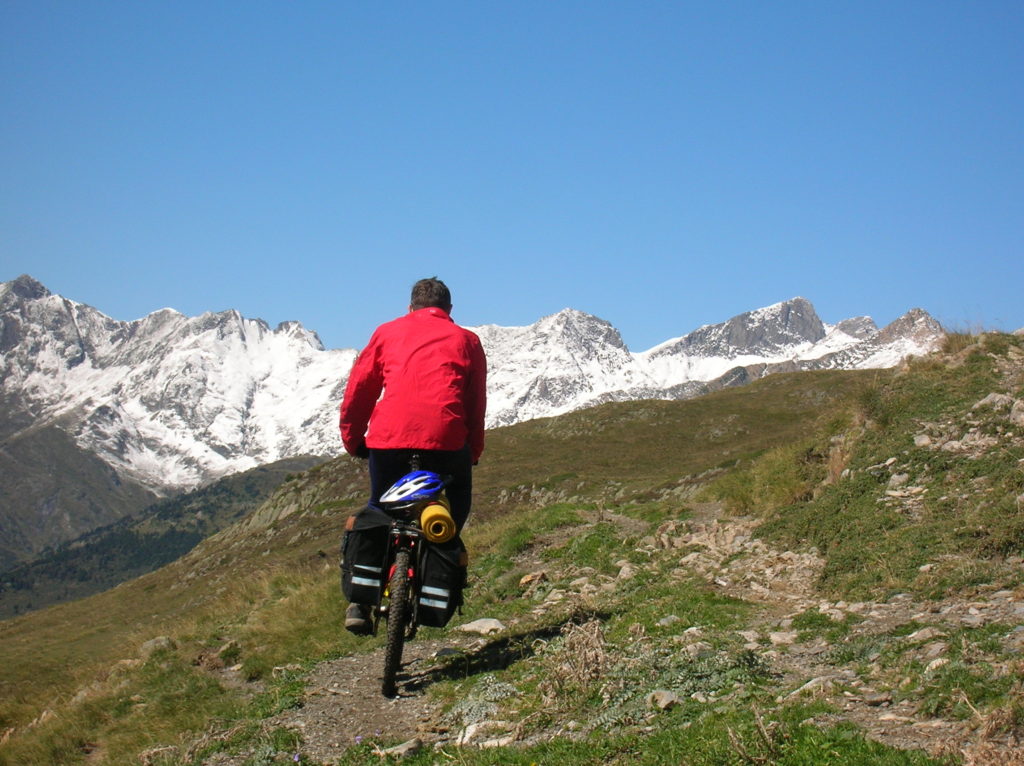 After crossing the Port de Salau (2,087 m) you are rewarded with  a long, straightforward double track descent the whole way down to the  Isil valley. 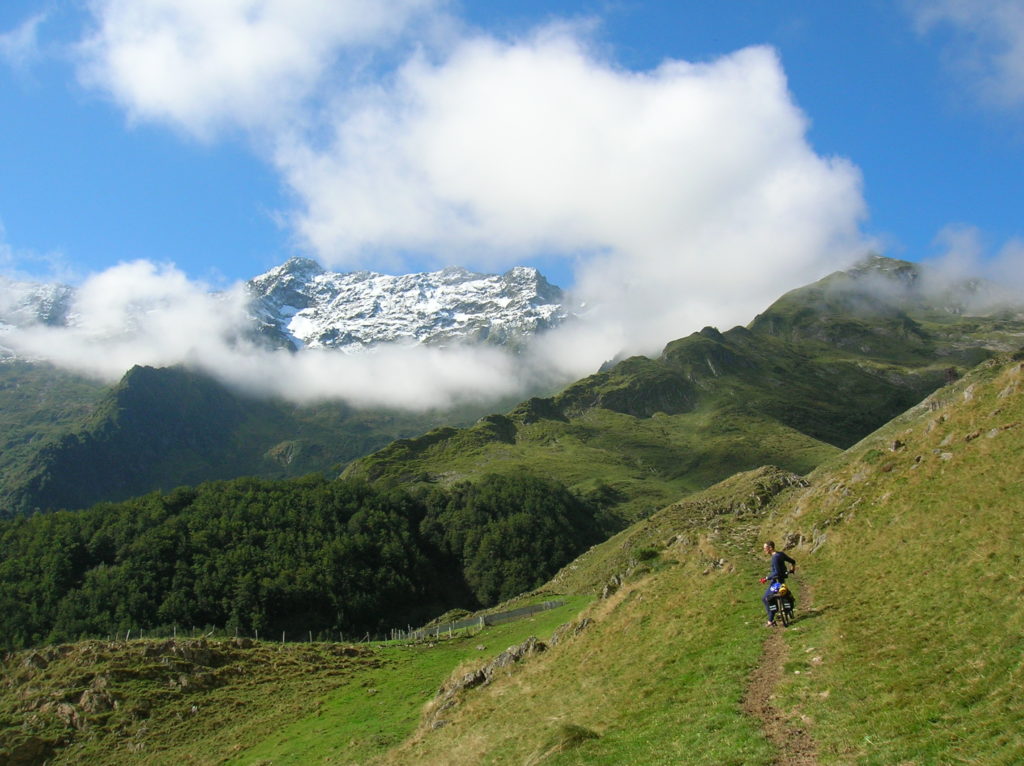 Continue down the valley down to Llavorsi. From Llavorsi  there are a number of options to get to the small town of La Seu d’Ugell to the east,  but the best one is as follows.  About 8 km south of LLavorsi take a minor road to Roni and continue towards Port Aine  but aim for the Col de la Baseta and take dirt roads and tracks through St Andre and descend into La Seu D’Urgell. 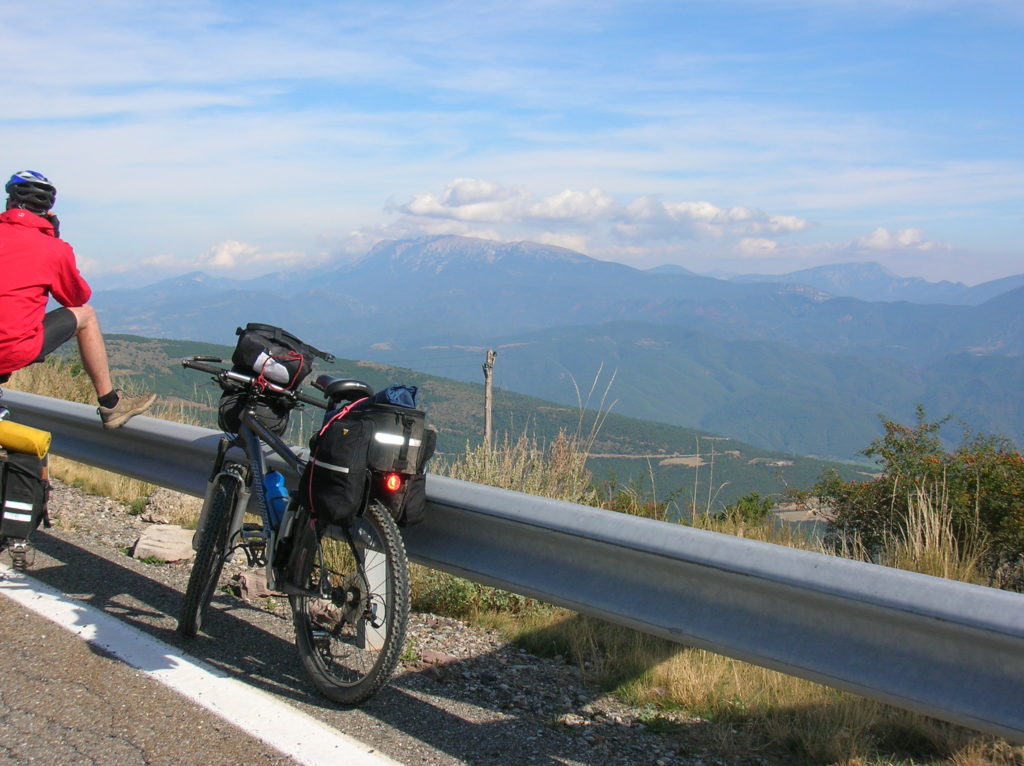 The next section takes you on the south side of the Sierra del Cadi across to Ripol. From La Seu head on minor road south east through El Ges and then from Tuixen heading east through Gosol and Saldes to Guardiola and Burguena. 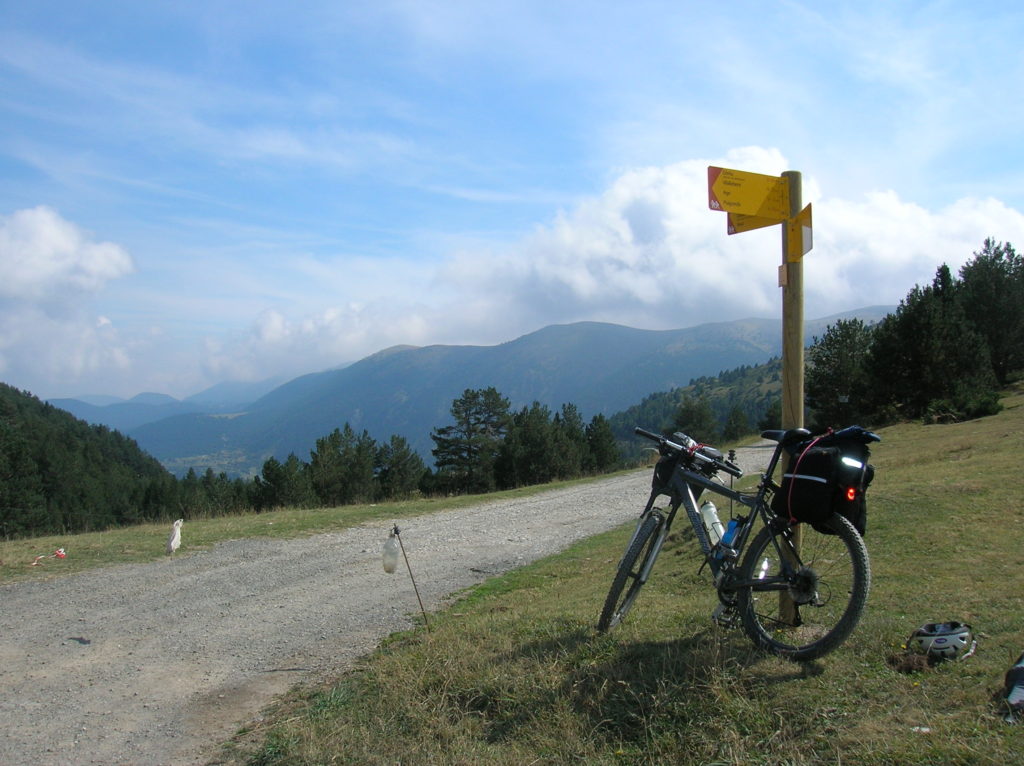 From here head east on the B402 over the Coll de  Coubet and descend to Olot.  From Olot a Via Verdes  (green roads) takes you all the way to Girona.  As it follows an old railway and is well surfaced gravel track gives an easy contrast to the hard riding  of the previous days. 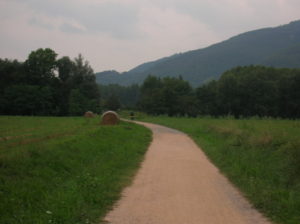 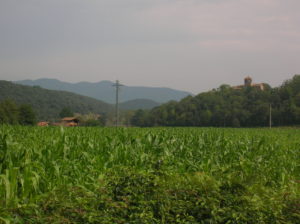 There are no guidebooks that cover this route but it’s quite easy to follow with the maps. There are guidebooks detailing other road and off-road routes.  The Cicerone Press guidebook  ‘Cycle Touring in Spain’  has a road trip across the Pyrenees from San Sebastion to Girona  http://www.cicerone.co.uk/product/detail.cfm/book/381/title/cycle-touring-in-spain#.VrYZx1KgzsE  If you are looking for a full off-road route, the Trans Pyrenees route looks fantastic.  If you’re intending following any great length of it then traversing east to  west would be easier as this is the direction described in the guide.  There only seems to be a guidebook in Spanish  http://www.librosderuta.com/393-la-gran-traves%C3%ADa-de-los-pirineos-en-btt-de-mar-a-mar.html

The more detailed Rando Pyrenees 1:50,000 maps Sheets 20,21, 22 cover the area of this trip from Seix in France to Olot and help with more detailed off-road navigation but note that the map doesn’t extend far enough south to cover the section described between Llavorsi and La Seu d’Urgell so the 1:150,000 map needs to be used for this. Maps available from The Map Centre http://www.themapcentre.com/rando-pyrenees-maps-at-150000-207-c.asp

Flights. London Stansted to Lourdes (actually called Tarbes-Lourdes Airport) by Ryanair https://www.ryanair.com/gb/en/  Tarbes is 9 km north of the airport and from there is a  train to St Gaudens.  Details on French Railways English websitehttps://uk.voyages-sncf.com/en/#/

Return flight from Girona to Stansted by Ryanair https://www.ryanair.com/gb/en/

May through to September are the best times to go but July and August can be hot even in the mountains. Towards the end of September there can be snow on the mountains and a frost in the higher valleys at night. Campsites tend to close from mid September.

The Spanish Meteo website gives forecasts for up to a week ahead http://www.aemet.es/en/portada

Campsites can come and go, so it’s best to get details from local tourist offices as UK websites only tend to have the larger caravan sites in Spain  listed. There plenty of opportunites for wild camping on the off-road sections.

The main villages have shops but villages on some sections are quite spaced so you may need to carry a bit extra food and especially water.