A 4-5 day, 300-350 km journey through the Outer Hebridies. It’s the ultimate island hopping experience in the UK with the constant presence of the Atlantic for company – 3,000 miles of ocean roll up on these shores and sometimes bring wild Atlantic weather with them, as well as ever changing light.  Travelling through these 10 islands of Outer Hebrides is to experience a vast diversity of land and seascapes, from the tropical white beaches of the most southerly island of Vatersay to the wild moorland hills of Harris and Lewis in the north.

It’s possible to do this route in either direction as there are good ferry/rail/bike bus connections to both Oban and Ullapool.  The advantages are going north to south is that you travel from the sometimes bleak, moorland landscape of Lewis and finish on the tropical looking beaches of Vatersay with its white sand and turquoise sea – not that it’s warm enough for a relaxing swim!  The big downside of travelling north to south is that the wind is prevalent in the southwest and you can if you’re unlucky, as we were once, to ride into a full gale for days on end.  Going south to north, you do have the relaxing start on the southern islands and the satisfaction of finishing at the Butt of Lewis- a lonely headland sticking out into the north Atlantic.  Most people ride south to north and so I’ve described in this way. It is also now a waymarked cycle route – the Hebridean Way cycling route. 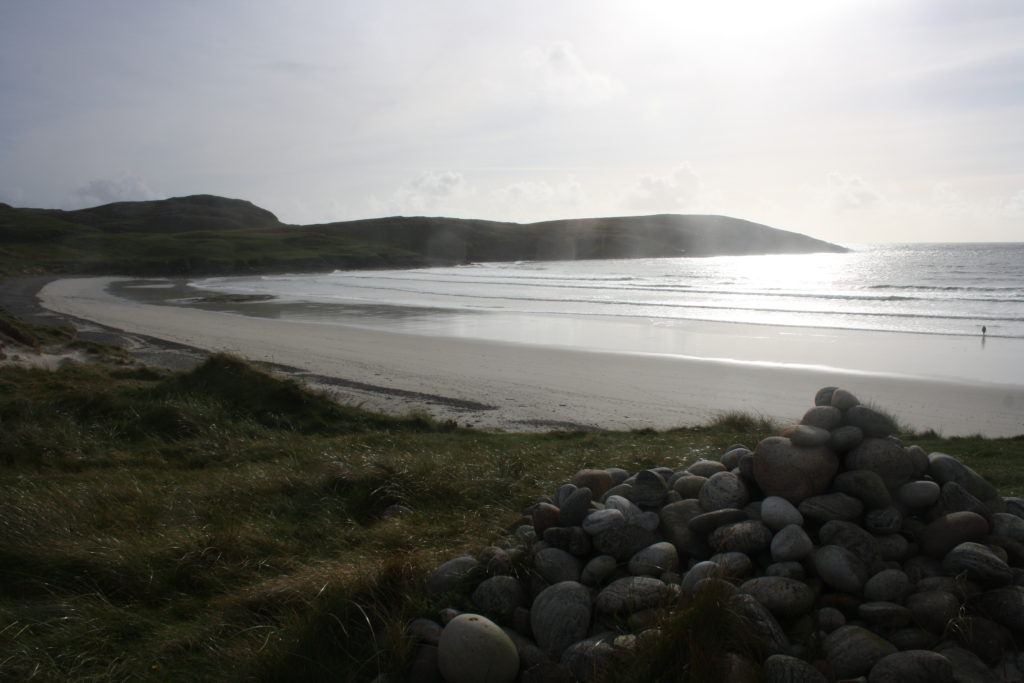 Starting in Barra, head south across the causeway to Vatersay and enjoy the white  sand beaches before heading back to Barra and take the road up the west side of Barra.  As you get to the north of the island  take a short diversion to to Traigh Mhor  a huge beach, which also doubles as the landing strip for the daily Loganair flight from Glasgow.  Take the ferry from Aird Mhor to the tiny island of Esiksay and then ride across the causeway to South Uist.  On the west side of South Uist machair and sandy beaches run  for nearly 20 miles whilst on the east there is a ridge of mountains which provides a striking backdrop to the ride through the island.  Although only 600 m in height these mountains are impressive and appear much higher as they rise from sea level.  If you’ve got time (and boots!) a day or two walking on these rugged hills will reward you with spectacular views over land and sea. 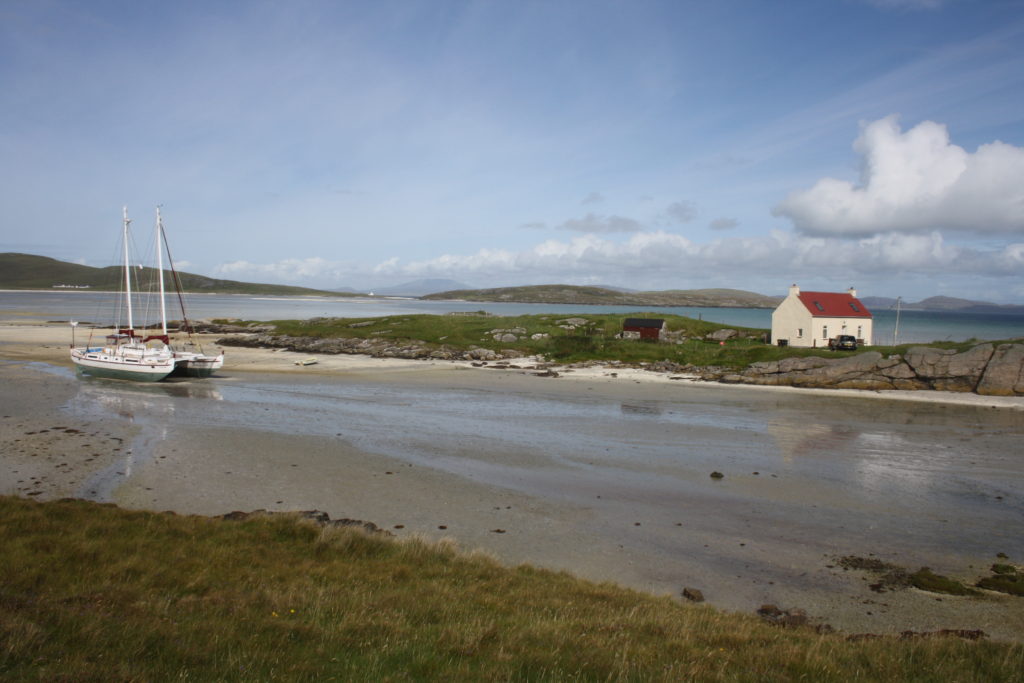 There’s only one ‘main’ road through South Uist but take the opportunity to take some of the minor roads on the west side to head down to the machair and beaches and to link a route through South  and North Boisdale.  At the north end of the island another causeway takes you across to Benbecula.  Benbecula is a small island which is virtually flat and has a number of military bases on it.  Take the minor road along the west coast and then along the north coast of the island before taking another causeway to the tiny island of Grimsay where the next causeway takes you to North Uist. 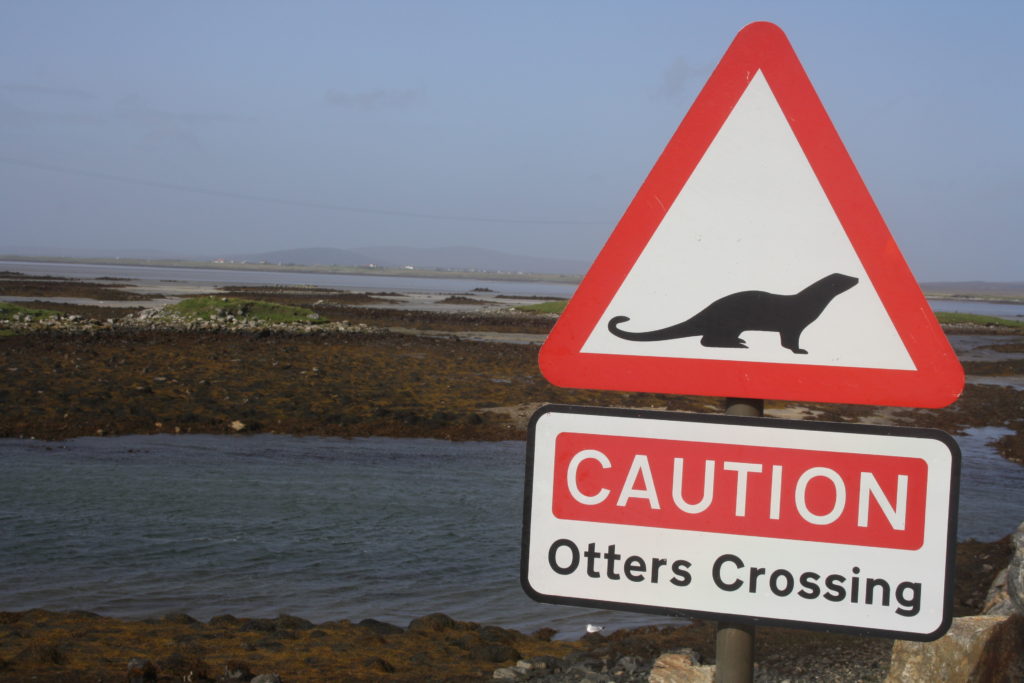 Once on north uist follow the single track road first on the west and then along the north side of the island there’s  superb coastal scenery with  vast sandy beaches.  Then head to the island of Berneray across the causeway.  There’s a hostel here perched in a great position just above the beach.  From Berneray catch the ferry across the Sound of Harris to Leverburgh on the South Harris. 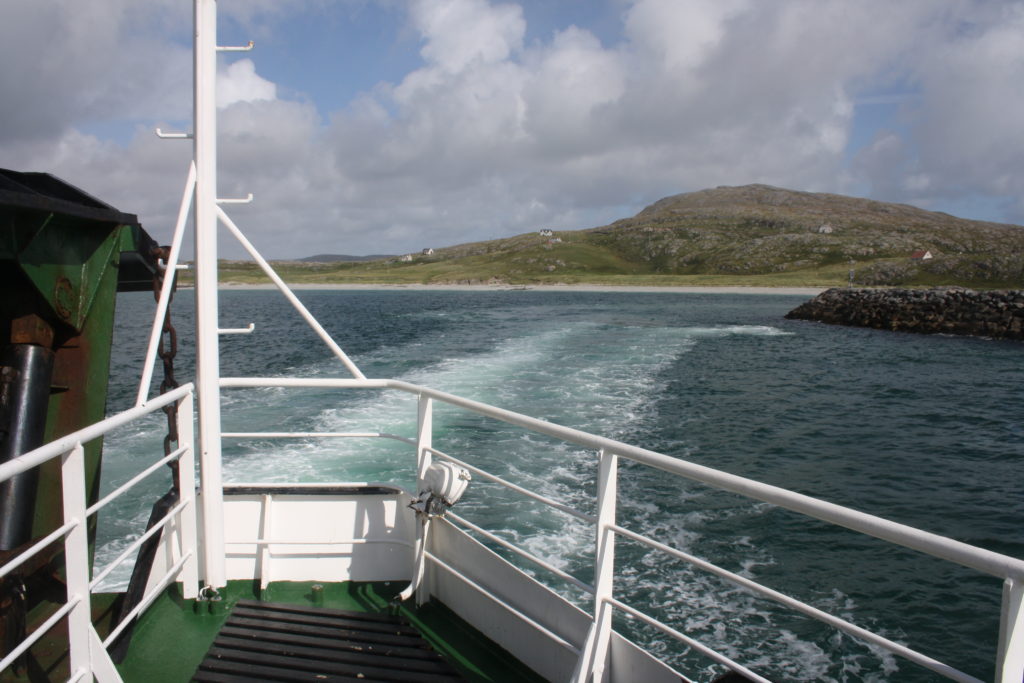 Harris is a much more mountainous island than those that you’ve travelled through so far.  South Harris has a gentler mountain landscape and stunning beaches, especially the vast Traigh Losgaintir, whilst North Harris has a  wilder rocky landscape.  The route takes in the best of both South and North Harris as you follow the road along the west coast and then into Tarbert, the main town and port.

From Tarbert there’s a steady climb to relatively low col  but in bad weather this can be a wild and inhospitable section of the route.  Heading northwards to the rugged mountainous terrain you cross into Lewis which is joined to Harris. 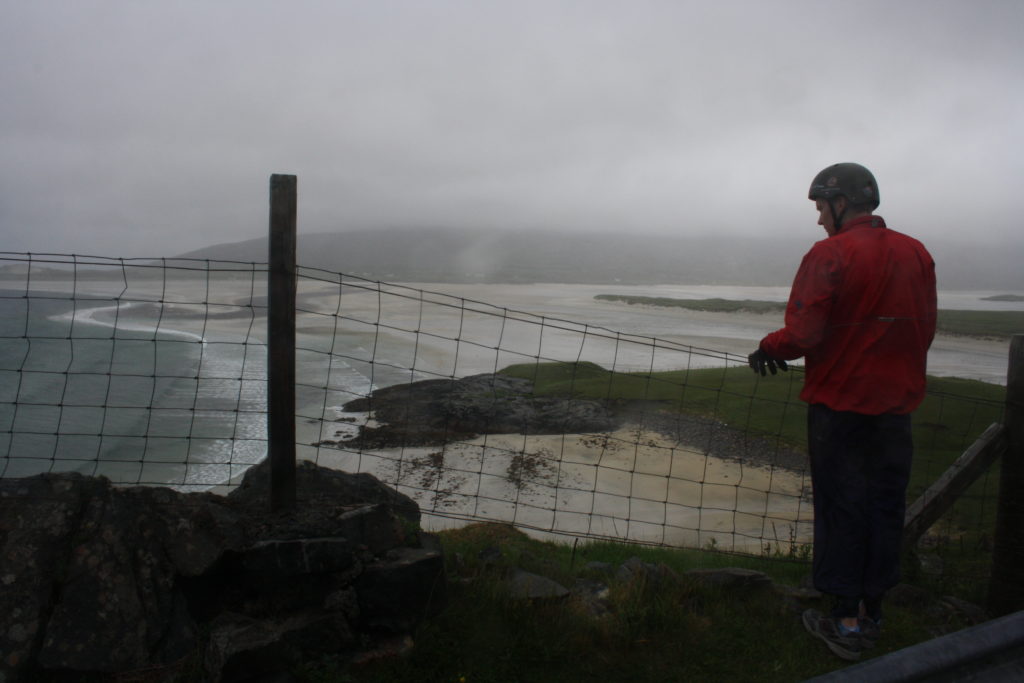 There’s only one road northwards towards Stornoway but it is generally not too busy.  Lewis is the largest of the outer Hebrides.  Parts of Lewis, especially the north, can be wild and bleak with miles of moorland peppered by hundreds of lochans.  But it also has stunning beaches and coastal scenery on the far west coast.  To reach the west coast and the Uig area, take a turn to Callanish about 8 miles before Stornoway.  Callanish is an impressive prehistoric set of standing stones in a dramatic location. 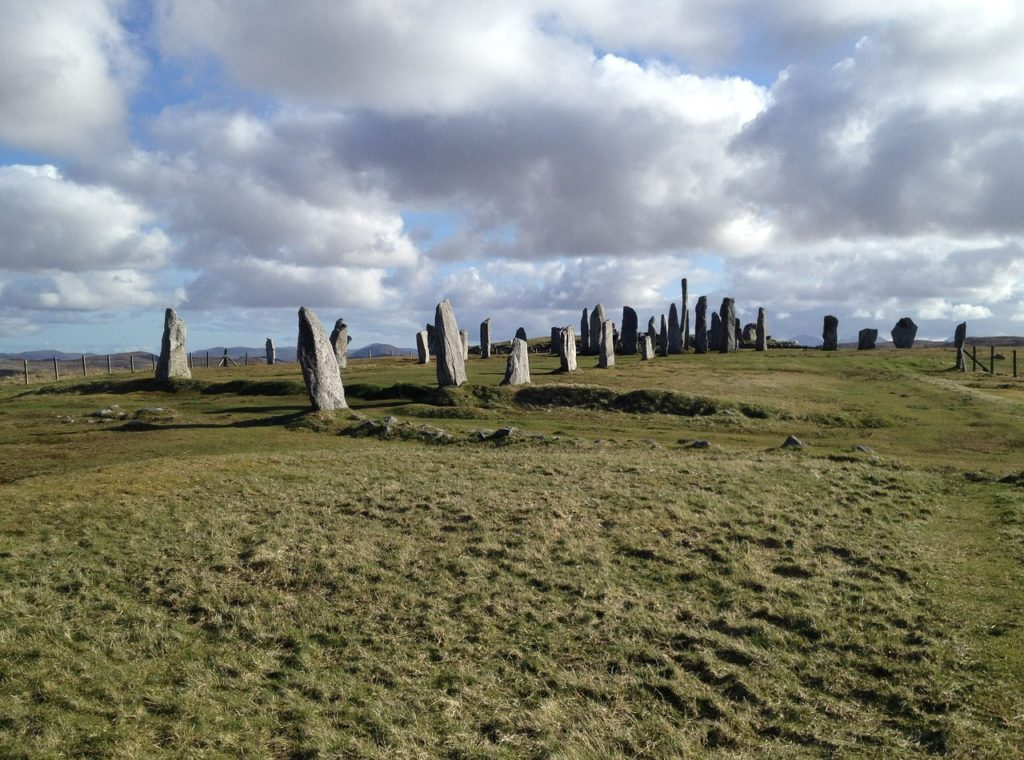 From here there is a minor road that you take to the rugged coastline of Uig.  This is a dead-end road so return to Callanish and head up the final stretch of the West Coast to the Butt of Lewis – a fittingly remote and windswept place to finish – except that you need to retrace your steps are about 15 miles and then head across the boggy peat moors to Stornoway and the Ferry to Ullapool.

The Hebridean Way cycle route  broadly follows the route given here and its website has a fairly detailed description http://www.visitouterhebrides.co.uk/see-and-do/activities/hebridean-way/hebridean-way-cycling-route

A good general map is the Phillips Red map of the Outer Hebridies available from the Map Shop http://www.themapshop.co.uk/europe/gb/GBgeneral.htm

The best times to go are between May and September.  The usual warnings about Scotland and midges in the summer apply, particularly in the boggy  ground of Harris and Lewis.  The Outer Hebrides receive the full force of westerly weather systems coming across the Atlantic so you need to be prepared, although equally the islands receive a lot of sunshine.

As this is a point to point trip it’s easiest to use Glasgow as the start and finish point, even if you’re driving to Scotland.

Outward journey travel from Glasgow by train to Oban  and then take the ferry to Barra.  You can book tickets and your bike by phone or online from Scotrail https://www.scotrail.co.uk/      Ferries are operated by CalMac – see below

Return journey take the ferry from Stornoway to Ullapool then return by the Highland Bike Bus to Inverness (details below) and then by train to Glasgow.  Although this requires pre-booking bikes on the trains and the bike bus , the journeys are quite straightforward.

Ferries. Calmac operate all the ferries between the Scottish mainland and the Outer Hebrides and the inter-island ferries.  Buy a Calmac island Hopscotch ticket which covers all the crossings on one ticket.  You can buy the ticket at the Calmac office in Oban. https://www.calmac.co.uk/article/2642/Hopscotch-8-Barra-Uist-Harris-Lewis

Bike bus. The Highland Bike Bus operates between Durness in Sutherland and Inverness and stops at Ullapool. The service runs from 19 May – 16 Sept 2016. Check the timetable carefully as it doesn’t run every day outside of July, August and Sept and doesn’t run on Sunday at any time. You book a place by ringing up at least 24 hours before you travel. http://www.inverness-durness-highland-bike-bus.co.uk/

Almost all of the campsites are listed on the tourist office website http://www.visitouterhebrides.co.uk/accommodation/camping-and-caravan-sites There are plenty of opportunities for wild camping away from the farmed areas of the islands and crofters land.

Also there are a number of good hostels on the islands if you want a break from camping. The Gatliff Trust  have three wonderful basic (in the best sense of the word) hostels in great locations http://www.gatliff.org.uk/.  Other hostels are listed in the Scottish independent hostels website            http://www.hostel-scotland.co.uk/hostels/area/Outer-Hebrides

The main villages have a good range of supplies but shops may not be open on Sundays or have limited opening. On the island of  Lewis there are no shops open on Sundays.