5-7 day ride, off-road and on road. This is a route of great contrasts – starting in the green, fertile lands of the Alpujarras and then crossing the high, barren slopes of the Sierra Nevada. The Sierra Nevada are the major mountain range of southern Spain, with Mulhacen (3,482 m) being the highest in Spain. The main riding attraction in the area is the Puerto Carihuela  (3,180m) – one of the highest passes in Europe that can be ridden by mountain bike. Although the climbs are tough, most of the trails are good, particularly the one climbing over the Puerto Carihuela.

The route described here starts from Malaga as there’s lots of flights from the UK.  Unfortunately there’s no railway along the coast so you can either ride to the starting point of this route or hire a car and leave it in one of the villages near the start.  It’s about 100 km from Malaga to the start. The alternative is to start from Almeira (see below for information) and ride directly from the airport -this is probably the better option, although I have not done it.

We started this ride just before Motril, where  we turned off northwards and after about 10 km took a minor road to La Bernardillar where we left the car.  From take minor roads and tracks heading first in a northwest direction and then east to Restabal.  From Restabal  take a combination of minor roads and tracks through to the villages of  Lanjaron, Orgiva, Pampaneira, Bubion to Capileira .  This is beautiful country with the white villages dotted along this southern side of the Sierra Nevada. The main objective from here is to climb to the Puerto Carihuela which starts from Capileira 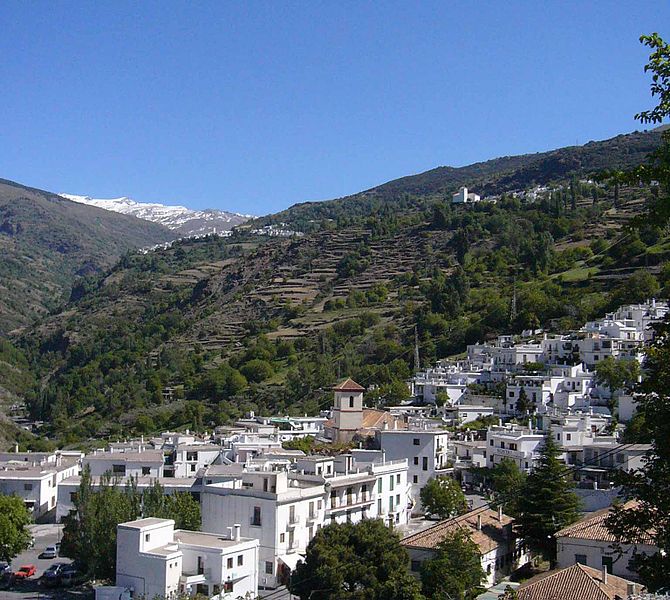 The track from Capileira climbs for over 1,700 m and it’s about 35km to the col.  The track has a good riding surface apart from some rocky sections in the last few kilometres but it’s a long steady pull, especially if it’s hot.  We decided to ride most of the track in the evening and bivied at about 2,800 m.  This gave us the final climb in the  cool of  the morning.  From the col there is a ski road that descends to Granada and provides a route that takes you round the east side of the Sierra Nevada  and then returns through the Alpujarra white villages.   We were short of time and decided instead to reverse the route and enjoy the 2,500 m descent to Orgiva!  With more time it would be possible to descend the north side of the Sierra Nevada towards Granada  and an about 10 km  before the city  take a minor road eastwards to Quentar and Guadix. From Guadix  take the  secondary road to  Jerez del Maquesado and La Calahorra before climbing to the Puerto de la Ragua (2,000m). 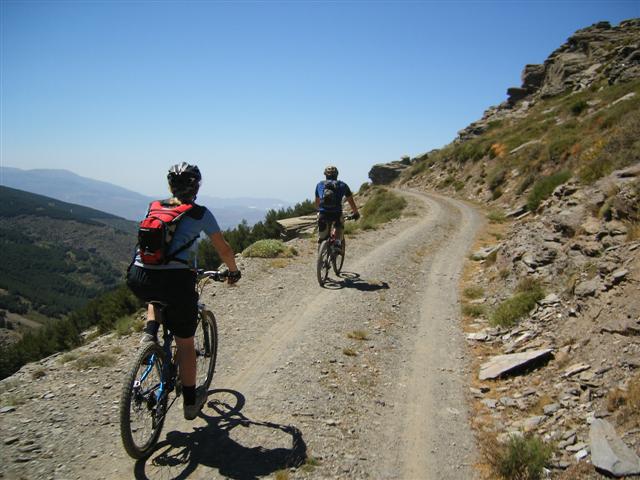 From the col drop down to Laroles.  From here it’s possible to link minor roads with dirt roads and trails heading westward through Valor, Juviles Cadiar and Trevelez back to Bubion and then on to Lanjaron. From Lanjaron  the outward route can be reversed to take you back to La Bernardillar.

Alternative route. Fly to Almeria  and  ride directly from the airport to  the Alpujarras via Alhama de Almeria.  The Cicerone Press guide  to cycle touring in Spain (link in ‘Guidebooks’ section below) gives a good description of this route as part of  a 7 day tour starting and finishing in Almeria. Or you could ride one way to Granada and take a train back to Almeira.

The Cicerone Press Cycle  guide book ‘Cycle touring in Spain’ contains 8 multi-day tours, including one in the Alpujarras/Sierra Nevada area. http://www.cicerone.co.uk/product/detail.cfm/book/381/title/cycle-touring-in-spain#.VsSKGeagzsF  You can either buy the whole book or just buy individual routes.

Trans Andalusia – a 2,000 km off-road traverse of Andalusia.  Website has maps, profiles, very detailed guides to each stage and GPS files for 2,000 km for each section of the route. See Granada province for stages covering this area. http://www.transandalus.org/index.php?lang=en

Maps. Both of the following maps give adequate coverage of the area

Available the Map Shop, who have a variety of different scale maps of this area http://www.themapshop.co.uk/europe/Spain/spain.htm

Timing is critical if you’re intending to ride across the 3,180m Puerto Carihuela.  There is often snow on the col until late June or early July but by that time temperatures in the valleys of the Alpujarra can be 30-35° making it very hot for the lower level sections of the route.  The end of June or late September are probably the optimum times to go but be prepared for bad weather in the high mountains at any time. Spanish Meteo http://www.aemet.es/es/portada

Flying.  Malaga it is one of the most popular destinations in Spain and is served by lots of the low cost airlines.  Almeria also is well served with Monarch, Easyjet, Thomas Cook and Thomson all flying there.

There are quite a few campsites in the area depending on your route, including a site in Trevelez http://www.campingtrevelez.com/?lang=en  and one in Orgiva – campsites can come and go (and some don’t have websites)  so check with one of the tourist offices when you get to the area. Wild camping is possible but there are some restrictions in the Sierra Nevada national park   so a stealth bivi may be preferable.

Supplies. Plenty of shops in the villages plus bars and cafes. Water can be an issue in higher sections so carry plenty.